“ THE HARDER YOU PRACTICE, THE LUCKIER YOU GET. ”

The qualifier for this event will be played on Sunday June 13 in Pierpont.

The qualifier for this event will be played on Sunday June 13 in Pierpont.

Each year the Committee designates a number of non-sponsored competitions which are identified by an asterix (*) in the calendar. This competition runs from April to September and there are three playing categories: 0 - 16.4; 16.5 - 24.4; and 24.5 - 36. At the end of the season, prizes are awarded in each category based on the best five scores, irrespective of the category in which they are played. A player's final ranking will be in the category in which they played the majority of their five best rounds. In case of a tie on points, the smallest handicap takes precedence.

This is an annual 4BBB stableford competition.

Names are drawn at random to form teams of four players irrespective of gender, handicap category or nationality. Each team is attributed a European Union country to represent, also drawn at random.

The Winter Cup comprises five fixtures played from November through to March.

These are neither counting nor qualifying, meaning that handicaps are not adjusted.

Members play in three categories and prizes are awarded for the aggregate of the three best scores. The number of prizes is dependent upon the number of players in each category.

In the event of a tie, the player with the lower handicap is considered the winner.

The CORA Cup is an annual international competition for 24 teams of eight golfers which takes place in Wimereux typically over the first weekend in April.  Each year the EUGC enters a team of eight golfers selected by the Captain comprising usually the members of the Club Committee, the winner(s) of the Asterix competition in first category, and/or the Club champions. There is a practice round on the Friday followed by a strokeplay (stableford) competition on Saturday and a foursomes competition on Sunday. The prize giving takes place immediately after the foursomes competition. The maximum playing handicap allowed is 18.4. However, if a team member has an official handicap higher than this, he or she can still be selected but will play off the maximum handicap of 18.4. The Club covers the team's enrolment costs for the CORA Cup, whilst each invited participant covers their hotel, food and transportation costs. 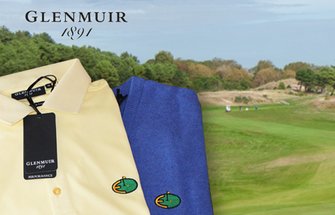 CLUB OUTFIT - DO YOU HAVE YOURS ?

For some competitions, wearing club colours is recommended. To purchase a polo shirt and pullover, please send us an email stating your size and we will arrange for you to try before you buy.

All articles have the EUGC club logo.

Check out the other photos in the EUGC Picture Library

The Club does not have its own golf course but travels to play in some of the best golf courses in Belgium and abroad.